It has been in the news for a little while, precipitating some fairly heated arguments across many a facebook and twitter account. If you haven’t heard, now that they’ve scrapped the Civil Union for same-sex couples and downgraded it to Registering a Relationship, the Queensland Government has amended the Surrogacy laws to disallow same-sex couples, those in a de facto relationship of less than two years, or a single person access to “…altruistic surrogacy…” options.

There are those in support of the move, stating it, like the removal of adoption rights for same sex couples, is for the benefit of the children that they are not brought up in unstable conditions (Shelton, 2009 & Lawson, 2008). A few sources of this side of the argument provide little more than anecdotal references to “studies”, with no real referencing to back them up. In any other kind of argument this would be laughed at passed over, yet it is allowed to continue!

De facto couples are also banned from accessing surrogacy as an option if they have been together for less than two years. There are some fears that other rights extended to de facto couples may also be next to be amended, such as inheritance rights.

Are you a single person? You’re also out of luck, with this amendment also barring you from access to non-financial surrogacy. As financial surrogacy is illegal by both old and new forms of the law, there’s no alternate route either.

If you are involved in surrogacy for one of the banned groups of people, you could face up to three years in jail.

There are some in the legal field who suggest that these changes may breach federal discrimination laws. I wonder if there is a QC who would offer pro bono services to fight this claim should it arise? 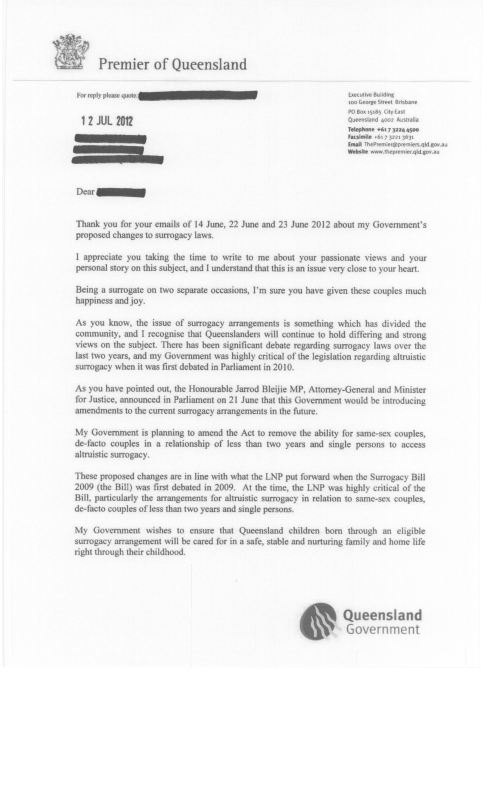 Those who have acted as surrogates in the past have written to their local members of parliament (see the image to the left), saying they oppose the changes. Keeping in mind that these women do not receive payment for their services, there is no financial reward to be gained from more people having access to surrogacy. They truly believe that everyone should have the ability to bring up a child and, if they cannot do so themselves, everyone should be able to have access to assistance.

So why am I writing about this? Why does it bother me? I’m not living in Queensland, or one of the banned groups of people. I’m not currently considering being a surrogate, though I have been approached on this matter.

I am writing about this to bring attention to the incredible injustice of it all. These laws, in my opinion and the opinions of many others, fly in the face of all that those working for anti-discrimination laws have achieved. I implore each and every one of you to send a letter, email, postcard, etc to your local member (if you’re in Queensland), or to any member of Parliament or the Senate in either your own state or the federal level.