Well, let’s face it. Cupcake. Singular. I only got a chance to try one of them. There was much tea to be had. Well, two types. But there were urns and urns and urns of hot water. And Cider. And other alcoholic beverages. But, sadly, the cupcakes were the only food fare on offer. And, again sadly, they seemed to run out all too fast. THAT, ladies and gentlemen, is why yours truly only managed a single cupcake before they all disappeared. For an event starting at eight pm and going until midnight, it did seem strange that there weren’t more foods on offer, even if they had to be bought. 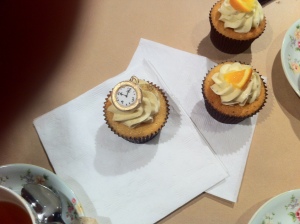 Please excuse my finger in the top left corner. I am normally quite careful with my photo taking.

The cupcake was lovely and moist, with just the right amount of crumble you want in a cupcake. The buttercream icing was a little crunchy, suggesting the icing was made in a hurry, but the sugar art clock was lovely. Not too crunchy (so it hadn’t been sitting there for ages) and not too soft. Apparently, each clock-topped cupcake has its own individual time on it. My companion for the event had the orange-topped one and concurred with my opinion. He’s a food-lover too, so I accept his opinion readily.

There were also chocolate cupcakes and I really would have liked to have tried one of those. Too often chocolate cupcakes are too dry, too heavy or just too powdery (in the case of those used cocoa powder). They disappeared very quickly too, so either they were just as good, or people were hungry.

These were made by a lass working out of her home. As such, these really do rival some of the “professional” cupcake businesses that seem to have popped up in the last few years. Being a bit of a cupcake aficionado, I think I can safely say that quality definitely made up for quantity in this case. My tummy just wished there was more. That could have been saved by there being more food.