I was lucky enough to attend this year’s Mundaring Truffle Festival on Saturday the 30th of July. While not strictly a restaurant or eating establishment, there were representatives of quite a few places where one might go to eat.

Despite the dark clouds threatening to send the large crowds scattering for shelter at any moment, there really was only one or two short-lived downpours.

I think we have to thank shows like “Masterchef” and “My Kitchen Rules” for the rise in popularity of such shows. However, it was a bit disappointing that so many of those who attended seemed to only be doing so because they had been told that truffles were amazing and, as such, held that view themselves. It’s a bit silly if you’re going to fork out (pun intended) that much money, time and effort to attend something like the truffle festival, that you wouldn’t be going to truly appreciate all that it had to offer.

So what did your intrepid Critic sample?

The local restaurant, The Loose Box, was there in fine form…

There were a bevy of items on the menu from the Loose box, but the best by far were these two.

The duck riette had a very full flavour that some thought was a bit rich for their liking. Slow-cooked duck combined with a rich gelatine with just a hint of truffle. The baguette offered a nice textural counterpoint.

The brie, while lovely, was a little disappointing. It was almost like it was served up as an afterthought. If memory serves, it was a double brie, but a triple would have been nicer. Also, the wheel had simply been cut in half with the truffle shavings sprinkled over the top and then placed back together, so whenever you tried to cut into it and place it on the baguette, the pieces fell apart. It would have been nice if it had been given a chance to set back together.

Linley Valley Pork had four chefs from different restaurants all working together with some lovely results. Sadly, my memory is failing me with the chefs names and their respective restaurants. 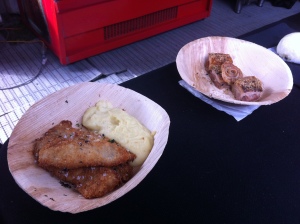 The fat on the pork belly was rendered oh so lovely, and while I love me a great huge piece of crackle, just the dust stopped this offering from being too rich to eat anything else.

The loin was lovely and moist, with the crumbing on the outside being nice and crunchy. The amount of mash was amazing! Normally in events like this, they strip the meal right down and offer it in a more haute cuisine manner, but this was actually a nice amount just as was.

Creative Catering had some interesting offerings…

A rabbit and truffle spring roll, which didn’t quite have the flavour explosion I was hoping for.

The mushroom and truffle pie which was lovely, though the pastry shell was a bit solid for my liking. Not that I can talk, because my pastry at home leaves a lot to be desired.

There was one stand out offering from Must winebar that deserves a mention all of its own. Wait for it… a chicken and truffle … ICECREAM! That’s right. an icecream using chicken and truffles. Sounds weird, messes with your preconceptions, but freaking awesome!

While not truffle-related there was a very interesting stand with native fruits:

Red centre limes and sunrise limes may have made it home with me to try and make into a lime brulee… Watch this space for more on that adventure. 🙂

So that was the truffle festival.

All in all a lovely day out.

It was a little disappointing that the Wine Show that was being held in the same venue was not better advertised at the entry. Paying for your ticket for entry to the truffle festival, there was also separate costs for the wine show, not actually mentioned until you got to the tent…