“New” media is a term being used by a variety of people and platforms to describe online tools for disseminating news. I am here today, to call an end to the madness, and suggest we stop calling it “new” and start calling it what it is: “just plain ole media”. 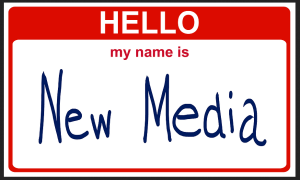 Why hello there “New Media”…

Let’s face it. The wen, the net, social media, email groups, newsletters delivered to your inbox, online video material, user-generated content… None of it is new anymore. I mean, sure. The number of years that the printing press has been around is a vastly larger number than the blink of an eye that we have all been online. Having said that, we have a new sense of time now, and these tools, in the new wibbly-wobbly time we live in, are old hat. Really. Let’s face facts. It’s a truth.

When will marketing executives and institutions wake up and smell the coffee? Calling your social media respondents “new media consultants” is silly. Having a “Head of New Media” is also silly. What do they do? Work just with the online tools, while another person sends off copy to print newspapers and magazines and television studios? No. That would be too much like the right hand operating with knowledge of the left hand. So why not have just “Head of Media” with a unified idea of what is going on? Makes much more sense to me!

So why do we still have scholarly journals using “New Media” like some sort of separation from media?

I could go on and on listing them. What matters is these are clear signs that the scholars of the world still view online tools for spreading news as new-fandangled and shiny. It’s not that surprising as new ideas tend to take a long time to be integrated into the vernacular of academics. I have a theory that it would take five full rotations of chancellory for a new idea to be integrated fully and no longer seen as “new”, but that’s a story best left for another time.

So, can we please agree to stop the silliness of this “new media” nonsense? It’s not new. It’s here to last, and the sooner we stop using antiquated terms and start viewing it in the correct light, the sooner proper policy can be made governing its use (Again, another story for another time).